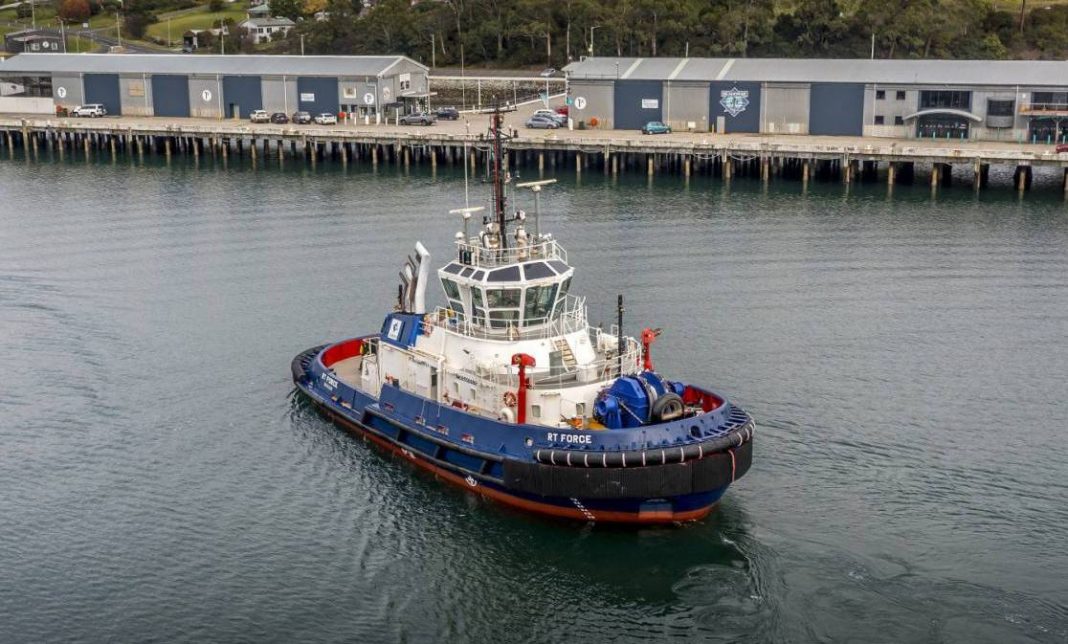 TasPorts has welcomed RT Force to its towage fleet at the Port of Bell Bay, in a demonstration of the company’s commitment to continually managing marine risk and enhancing the services provided to customers.

“This will be the first Rotortug operating not just in Tasmania but on the East coast of Australia,” Mr Donald said.

“The Rotortug is one of the most capable tugs in the industry and is utilised by some of the world’s largest ports such as Rotterdam, Port Hedland and Brunei, to manage risk and optimise shipping.

“RT Force will also be a key element in ensuring the reliability of our customer’s supply chains through improved risk mitigation at one of Tasmania’s major deep water commercial ports.”

The Rotortug was invented by KOTUG and, unlike traditional types of tug, it utilises a three-thruster design, which provides greater manoeuvrability and improved response in the event of a marine emergency.

“We are very happy that the RT Force has set sail to Tasmania to support the operations of TasPorts,” said Ard-Jan Kooren, CEO of KOTUG International B.V and Rotortug B.V.

“For sure this robust vessel will improve the operations in terms of redundancy, cost savings, faster handling and accurate maneuvering and enhanced safety. We look forward to a great cooperation.”

All training, both for the tug crews and marine pilots, has been conducted in Tasmania at the Australian Maritime College under the guidance of KOTUG’s dedicated Training & Consultancy division.

“AMC Search, the training and consultancy division of the Australian Maritime College, is honoured to have been selected by TasPorts to provide training support for the new tugboats” said Dean Cook, CEO AMC Search.

AMC Search uses an ultrarealistic hydrodynamically accurate model of the new vessel that immerses TasPorts crew in a controlled simulated environment to practice operating the tugboats before taking the helm in the real world at the Port of Bell Bay.

“This world-class Rotortug simulation and training solution ensures the crew are familiar with the vessels prior to real-world operations and that they are operated safely and efficiently,” concluded Mr. Cook.

RT Force was built in 2010 and began its career operating at the world’s largest bulk export port – the Port of Port Hedland in Western Australia. It is now being chartered by TasPorts. To learn more about the TasPorts fleet click here.