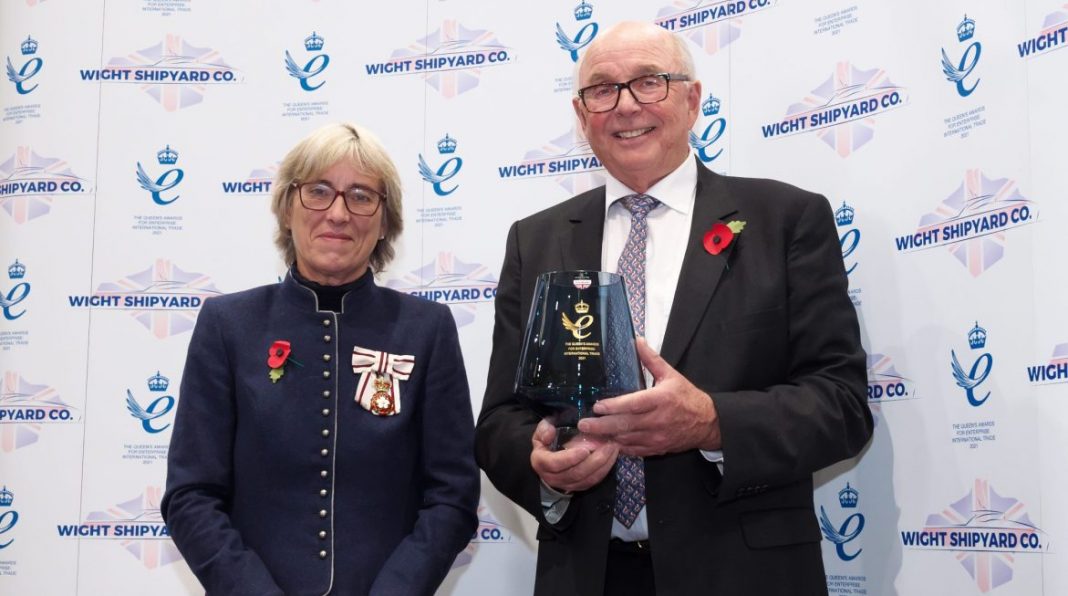 The Wight Shipyard Co have today been formally presented with a Queen’s Award for Enterprise for International Trade by Mrs Susie Sheldon JP, Her Majesty’s Lord-Lieutenant of the Isle of Wight in a ceremony at the thriving shipyard in East Cowes. The award was in particular recognition of their outstanding short-term growth in the export market.

Receiving the award, Peter Morton, Chief Executive of The Wight Shipyard Co. commented: “We are delighted to accept this prestigious Queen’s Award for Enterprise in the International Trade category on behalf of everyone at the yard who are very much part of the re-birth of the British shipbuilding industry. We set out to stem the tide of orders going to overseas yards and to capitalise on the local skills that we are fortunate to have on the Isle of Wight.

The Wight Shipyard Co is one of 205 organisations nationally that have been recognised in the Queen’s Awards for Enterprise having been set up in 2010 after the restoration of a classic gentleman’s motor cruiser for Sir Charles Dunstone, one of the country’s leading entrepreneurs and whose family office is the main backer of the yard.

Following the successful completion of that project, discussions began with the owners of Red Funnel about the construction of the new Red Jet fleet of fast catamarans servicing the Isle of Wight and to date two have been built and continue to be serviced at the yard.

Orders quickly followed for two Thames Clippers with the yard proving its capabilities in high-tech aluminium construction, but the big success has been in effectively competing internationally with overseas yards. Exports to date include two 450 pax ferries for Mexico, a 40-metre vessel for Austria and four vessels for Malta with 50% of Wight Shipyard Co revenue coming from export over the last five years.

Peter Morton further commented: “We have the strongest pipeline of work since inception, and things look set to go from strength to strength. What I am particularly proud about is the team that we have assembled and our commitment to apprenticeships across all trades in the shipbuilding industry means that we have a bright future operating at the cutting edge of aluminium construction and carbon reduction. The skills we are fostering mean that we can compete on the international stage as well as domestically and we very much hope that this award will propel our case for building the new Border Force vessels.”

The Wight Shipyard Co. has a firm commitment to utilising island suppliers wherever possible, supporting in excess of 100 local companies of varying sizes. The yard also supports local charities such as the Northwood Park Tennis Court renovation and the Island Sailing Club.