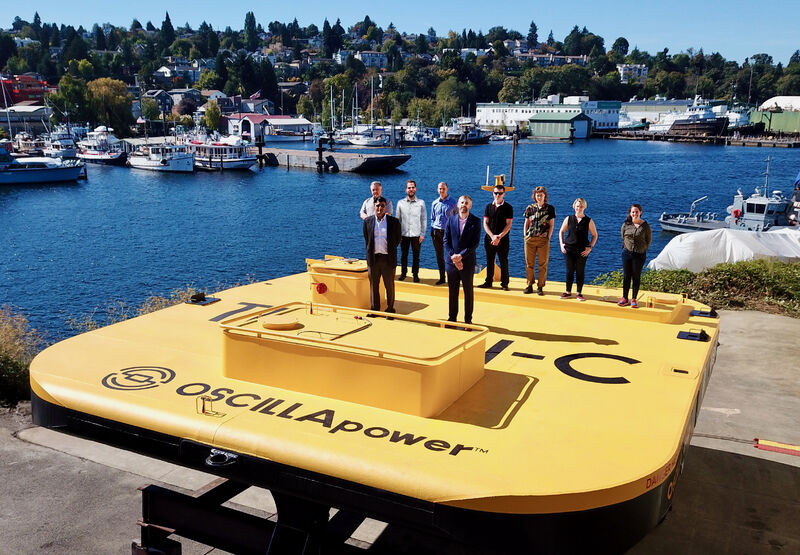 Oscilla Power today put its revolutionary new wave energy system, the Triton-C, on a barge to Kaneohe, Hawaii, where it will be deployed offshore of the Marine Corps base and will generate clean, renewable power from the waves of the Pacific Ocean. This is the first commercial-scale demonstration of the Triton technology, which has been under development for more than a decade, supported by the State of Washington, the U.S. Department of Energy and private funders. The Triton-C is the first and largest wave energy platform ever produced in Washington State.

“This is an historic day for Oscilla Power and our partners and funders,” said Balakrishnan (Balky) Nair, CEO of Oscilla Power. “This is the result of innovation and collaboration between so many players, from the engineers and scientists that developed the design, to the fabricators that realized this concept, as well as government officials, venture capitalists and private funders. We can’t wait to install the Triton-C in its new home and begin generating power.”

At its core, the Triton technology uses a highly efficient approach known as a “multi-mode point absorber.” It consists of a geometrically optimized surface float connected to a ring-shaped, vertically asymmetric heave plate by three taut, flexible tendons. Unlike most conventional wave energy devices, Triton’s surface float can extract energy from ocean waves in all six degrees of freedom (heave, pitch, surge, roll and yaw) allowing for increased energy capture across a wider range of ocean conditions. This allows a greater average annual energy production and a substantially lower levelized cost of electricity.

“The launch of the Triton-C is an impressive reflection of the clean energy innovation supported by our state’s Clean Energy Fund,” said Gov. Jay Inslee. “It’s exciting to see this technology reach commercial stage and deliver clean, resilient energy to island and coastal communities.”

The Triton-C will be installed at the Navy’s WETS site, off the coast of Hawaii at the Marine Corps base in Kaneohe. This is a pre-permitted location and includes all required infrastructure, such as the subsea grid connection and moorings. While the Triton-C is designed to produce 100kW in energetic West-coast waves, the waves at this site are about half the rated level due to a milder climate. In addition, the test site is physically constrained to only allow 30kW to the grid, enough to provide power for about 25 houses.

“Oscilla Power, in partnership with DOE, has made substantial progress over the years, advancing from design to now demonstrating their scaled system in open water, which will validate years of testing and prototyping,” said Jennifer Garson, Acting Director of the Water Power Power Technologies Office at the U.S. Department of Energy. “These types of systems will be critical to unlocking the potential for wave energy to serve remote communities and unlock power potential in the growing blue economy. DOE’s Water Power Technologies office looks forward to the successful launch in Hawaii of the Triton-C, and I congratulate the Oscilla team on the culmination of their hard work that brought them to this launch.”

The Triton-C is intended to be competitive in locations that are off-grid and diesel powered where the power cost can be excessive. Some locations, such as rural areas of Alaska, may currently be paying upwards of $1/kWh for electricity, and solar or wind may not be viable options. Oscilla Power expects to be able to be price competitive, while being far cleaner and more sustainable.

The utility-scale Triton will be about three times bigger in size than the Triton-C and will provide 1 MW of power generation. The first utility-scale demonstration of the Triton is planned to be near a port in Southern India.

Founded in 2009 in Seattle, Oscilla Power develops novel wave energy systems that produce power at a lower levelized cost than traditional wave energy systems, and are cost-competitive with incumbent systems. Its core Triton wave energy platform is engineered to produce renewable power at a levelized cost that is competitive with current clean energy costs. Oscilla Power is producing two wave energy systems with this multi-mode architecture: the Triton and the Triton-C. The Triton-C is a 100 kW rated power system designed for remote or isolated communities, or small coastal facilities, while the Triton is a 1 MW rated power system that is designed to be installed in large arrays to provide utility-scale power. More information can be found at www.oscillapower.com.