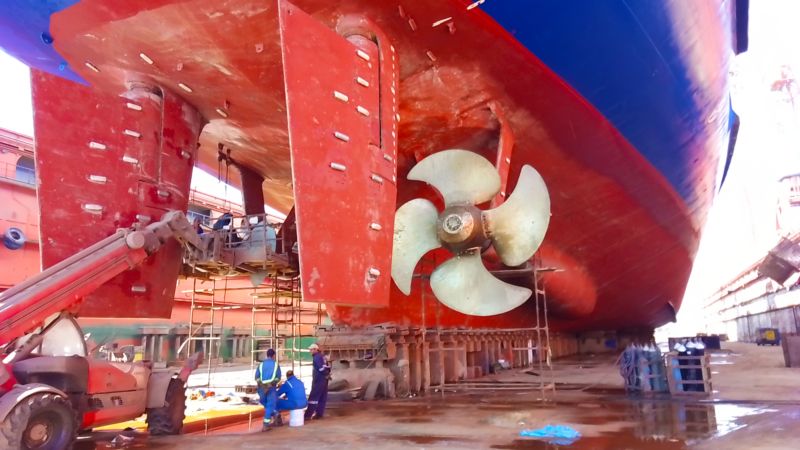 The 1991-built, 400-passenger capacity RoPax, owned by El-Etehad International and chartered to Scandro Holdings, began operations on the revived Piraeus–Limassol route in June 2022 following an extensive refit in the floating dock operated by the Suez Shipyard in Egypt.

Nefertiti Marine supplied a total of 14 Thordon SXL forward, intermediate, and aft bearings machined to fit propeller shaft diameters of 525mm (20.6in) and 530mm (20.8in). The original rubber propeller shaft bearings had completely worn out, exceeding the maximum clearances allowed by 5 and 7mm (0.19 and 0.27in).

According to Karim Abd El Karim, Engineering Manager, Nefertiti Marine, “there were no visible cooling grooves in some areas of the rubber bearing due to the excessive wear”.

El-Etehad’s decision to replace the rubber propeller shaft bearings with the SXL elastomeric material followed the success of a similar installation to the owner’s 1993-built sistership Amal. Suez Shipyard converted the vessel’s original bronze rudder bearings to SXL in 2021.

El Karim said: “The owner was familiar with the environmental benefits of a propeller shaft bearing lubricated by seawater but wanted a more cost-effective, low maintenance solution capable of reducing time in drydock. Compared to a traditional rubber bearing system, an SXL bearing has a much longer wear life and, in this case, doubled the time between drydockings. We worked closely with the shipyard on this project and completed commissioning in early June.”

Awny Gad, Engineering Superintendent, El Etehad International, said: “It was important to have a bearing system proven to reduce the high operational expenditure associated with traditional rubber bearings. When Nefertiti Marine put forward the SXL solution, we were keen to try it. So far, we are very satisfied with the performance of the Thordon material and the 24/7 customer service we receive from Nefertiti.”

Prior to Daleela’s history-making voyage, the last ferry to operate the 30-hour route between Greece and Cyprus was the Salamis Star in October 2001.

Craig Carter, VP Business Development, Thordon Bearings, said: “We are immensely proud to have been involved in this project, which marks the revival of a maritime link between Greece and Cyprus after more than twenty years.”

Daleela sails from Piraeus to Limassol every Tuesday and Friday with the return crossing on Wednesdays and Sundays.

Thordon Bearings designs and manufactures a complete range of journal bearing and seal systems for marine, clean power generation, pump, and other industrial markets. The bearing systems are manufactured using Thordon proprietary non-metallic polymer materials that are lubricated with water eliminating oil or grease usage, meaning ZERO risk of oil pollution to our rivers, lakes and oceans and elimination of lubricant costs.  Thordon systems and bearings are available worldwide through over 70 agents and distributors. www.thordonbearings.com