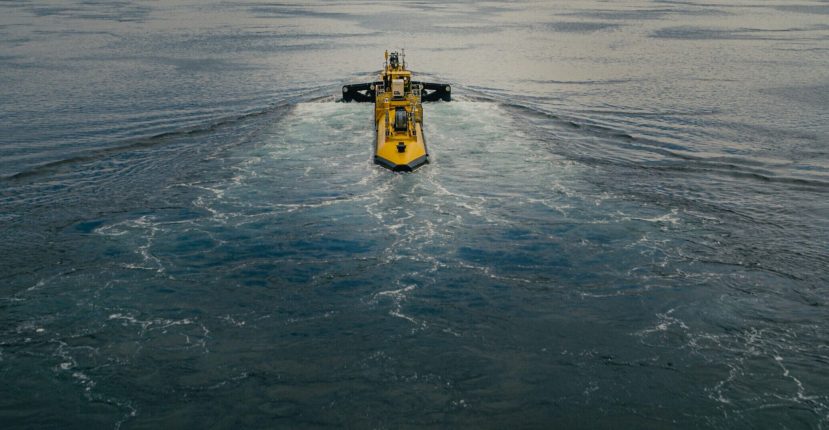 Orbital Marine Power’s O2, the world’s most powerful tidal turbine, has commenced grid connected power generation at the European Marine Energy Centre (EMEC) in Orkney. The innovative, floating turbine is anchored in the Fall of Warness where a subsea cable connects the 2MW offshore unit to the local onshore electricity network.

Manufactured and launched in Dundee earlier in the year before being towed up to Orkney, the O2 is Orbital’s first commercial turbine and represents the culmination of more than 15 years of world leading product development in the UK. The 74m long turbine is expected to operate in the waters off Orkney for the next 15 years with the capacity to meet the annual electricity demand of around 2,000 UK homes with clean, predictable power from the fast-flowing waters. In a further ground-breaking element of the project, the O2 is to provide power to EMEC’s onshore electrolyser to generate green hydrogen that will be used to demonstrate decarbonisation of wider energy requirements.

Orbital CEO, Andrew Scott, said: “This is a major milestone for the O2 and I would like to commend the whole team at Orbital and our supply chain for delivering this pioneering renewable energy project safely and successfully. Our vision is that this project is the trigger to the harnessing of tidal stream resources around the world to play a role in tackling climate change whilst creating a new, low-carbon industrial sector.”

The construction of the O2 turbine was enabled by public lenders through the ethical investment platform, Abundance Investment, as well as being supported by the Scottish Government by the Saltire Tidal Energy Challenge Fund. The O2 project has been supported through funding from the European Union’s Horizon 2020 research and innovation programme under the FloTEC project and the European Regional Development Fund through the Interreg North West Europe Programme under the ITEG project.

Commenting on the news Cabinet Secretary for Net Zero and Energy Michael Matheson of Scottish Government said: “With our abundant natural resources, expertise and ambition, Scotland is ideally-placed to harness the enormous global market for marine energy whilst helping deliver a net-zero economy. That’s why the Scottish Government has consistently supported the marine energy sector for over 10 years, including through the Saltire Tidal Energy Challenge fund, which provided £3.4m for this project.

“The deployment of Orbital Marine Power’s O2, the world’s most powerful tidal turbine, is a proud moment for Scotland and a significant milestone in our journey to net zero. I congratulate Orbital Marine, the European Marine Energy Centre and everyone who has made this achievement possible,” Matheson continued.

Orbital is now setting its sights on commercialising its technology through the deployment of multi-MW arrays. Supporting this endeavour in UK waters would bring substantial benefits beyond complimenting the clean energy transition, as evidenced in the build of the O2; where around 80% of the turbine was delivered by UK suppliers and operation will bring long term employment to coastal communities. As a product of commercialisation costs are projected to fall steeply from roll-out of the technology, as previously demonstrated with wind and solar energy.

On next steps Scott said: “We believe pioneering our vision in the UK can deliver on a broad spectrum of political initiatives across net zero, levelling up and building back better at the same time as demonstrating global leadership in the area of low carbon innovation that is essential to creating a more sustainable future for the generations to come.”

Orbital Marine Power Ltd is an innovative Scottish engineering company, headquartered in Orkney, and focused on the development of a tidal energy turbine technology capable of producing a dramatic reduction in the cost of energy from tidal currents. The Orbital technology has been under continuous engineering development, including rigorous testing of scaled systems in both tank conditions and open ocean environments since the company was founded in 2002. The company currently employs 32 staff with offices in Orkney and Edinburgh.

The O2 turbine has a 74m long hull structure with twin 1MW power generating nacelles at the end of retractable leg structures designed to give low-cost access to all major components for through life servicing. 10m blades give the O2 more than 600m2 of swept area to capture flowing tidal energy. The floating structure is held on station with a four-point mooring system where each mooring chain has the capacity to lift over 50 double decker buses. Electricity is transferred from the turbine via a dynamic cable to the seabed and a static cable along the seabed to the local onshore electricity network.

O2 has the ability to generate enough clean, predictable electricity to meet the demand of around 2,000 UK homes and offset approximately 2,200 tonnes of CO2 production per year.