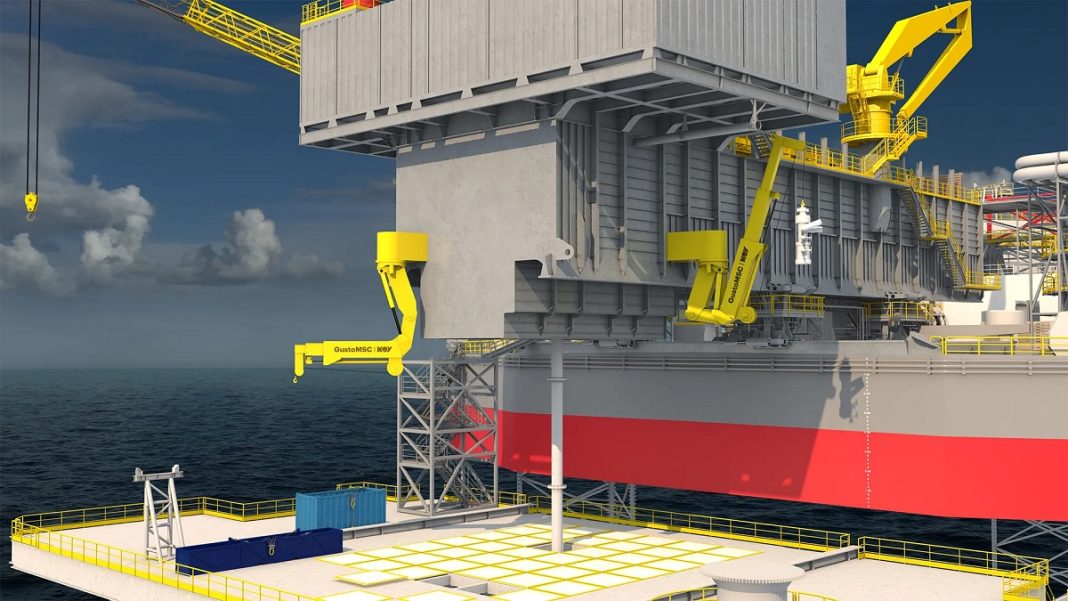 NOV has delivered the first GustoMSC Chela Twins cranes to Velesto Energy Berhad. The cost-effective cranes were installed and commissioned onboard the NAGA 6, a GustoMSC CJ46 jack-up drilling rig design, at the Keppel FELS shipyard in Singapore.

The entire engineering and construction project was completed within just 8 months. After receiving the order in September 2021, the team immediately put all the needed effort. The fabrication was completed in April and the first-ever Chela Twins were qualified as an accepted product. The commissioning of the Chela Twins in early August this year is an impressive achievement and marks a great milestone.

Velesto Energy Berhad ordered the two Chela Twins cranes for its NAGA 6 jack-up drilling rig in November 2021. The Chela Twins are two independently operated cranes designed to work in pairs on a cantilever to create the best combination of reachability, handshake capabilities, and construction simplicity.

Featuring a telescopic crane boom, Chela Twins are a cost-competitive alternative for the Chela Single crane. In 2019, the first Chela crane was delivered to Maersk Drilling and installed onboard the Maersk Invincible, an ultra-harsh environment GustoMSC CJ70 jack-up drilling rig design. It has proven its claims while operating at the Valhall field in the Norwegian North Sea for Aker BP.

The Chela series of multifunctional arms offers an extra hand in operations. Due to its crablike motion characteristics, Chela can reach below the cantilever as well as reach toward the main deck, providing crane access to an area traditionally blocked by the cantilever when drilling.

Chela provides an advantage in development drilling, infill drilling, and plug and abandonment operations. Depending on the well-program, the total time saved varies between 5 and 15% of the total rig days per well. This proven technology represents a robust opportunity to improve the return on investment (ROI) for every well drilled. With fewer rig days per well, Chela directly reduces the industry’s environmental footprint and costs.