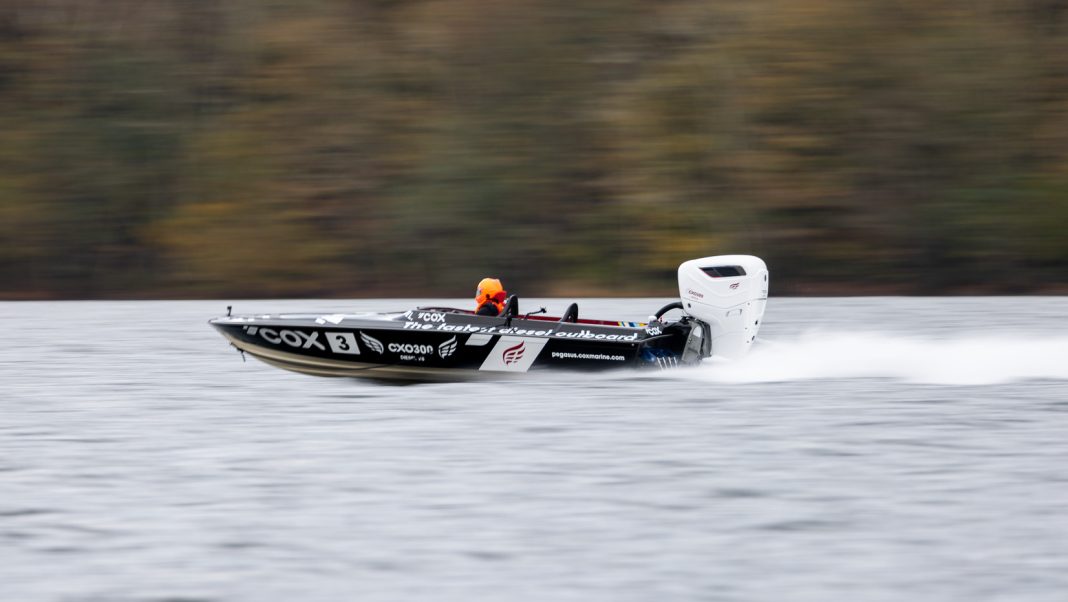 The Cox Marine team and their vessel Pegasus, surpassed their own three prior speed records, recorded earlier this week, to clinch a coveted World Record title, for World’s fastest Diesel outboard* on Thursday 3rd November achieving an average speed of 62.27mph.

Measured across a kilometre long course requiring a flying start, Pegasus, a 21ft Hallett Vector, piloted by experienced powerboat racer Adam Brown, was required to travel the course’s distances in both directions, within an hour to minimise any potential wind advantage. With official Water Speed Record timekeepers’ oversight, both time and the speed in both directions, are recorded and then averaged over the two runs constituting the final speed.

Returning to shore following the successful completion of the second run, Adam said: “While there will, of course, be faster boats out on the lake today, it’s a great honour to be able to set a new record. There may be future diesel outboard powered record attempts, but Cox Marine will always be the first. 62.27mph is a great time for a 300hp engine which is straight off the production line and not having been optimised for powerboat racing.”

It is perhaps unsurprising to report that the boat and engine behaved impeccably during the record runs. “The CXO300 simply did everything it was supposed to”, continued Adam, “It was quiet, responsive, smooth and the overall experience was not the usual noisy seat-of-the-pants drama that a modified gasoline outboard record run often provides.”

The Pegasus project was supported by a team of four Cox Marine staff during Coniston Speed Week, and lead by their Head of Research and Development, James Eatwell who said;

“For the project team of Pegasus, we set out our stall early. We wanted to demonstrate that power and performance can still be achieved without damaging our environment. It’s one of the founding principles at Cox Marine and continues to drive our pursuit of innovation through technology today. We couldn’t think of a better forum in which to emphasis this, than vying for a World Speed Record and simultaneously debuting the CXO300 use of HVO fuel.”

The Pegasus team, went to great length to protect the integrity of their Record attempt, limiting modifications to only the essential foot pedal, dictated by Coniston’s Race Week Regulations and a custom fabricated lift plate to allow for the low transom height of the GRP Hallet Vector.

Aside from that, alterations during the event were limited only to the use of different propellers, which ranged in size, shape and pitch angle and the propellent.

With initial runs being carried out on regular diesel, before switching over to HVO100 fuel Cox Marine’s internal testing, carried out lakeside during the runs, have shown a 28% fuel saving over an equivalent 300hp gasoline engine and net CO2 emissions reductions of 92%.

Great news for existing Cox Marine customers and prospective new ones, is that the Coniston debut, will mark the company’s official support of HVO fuel use in their outboards without impacting warrantees, service schedules or requiring any modification to the engine.

To find out more about the CXO300 visit Pegasus.coxmarine.com