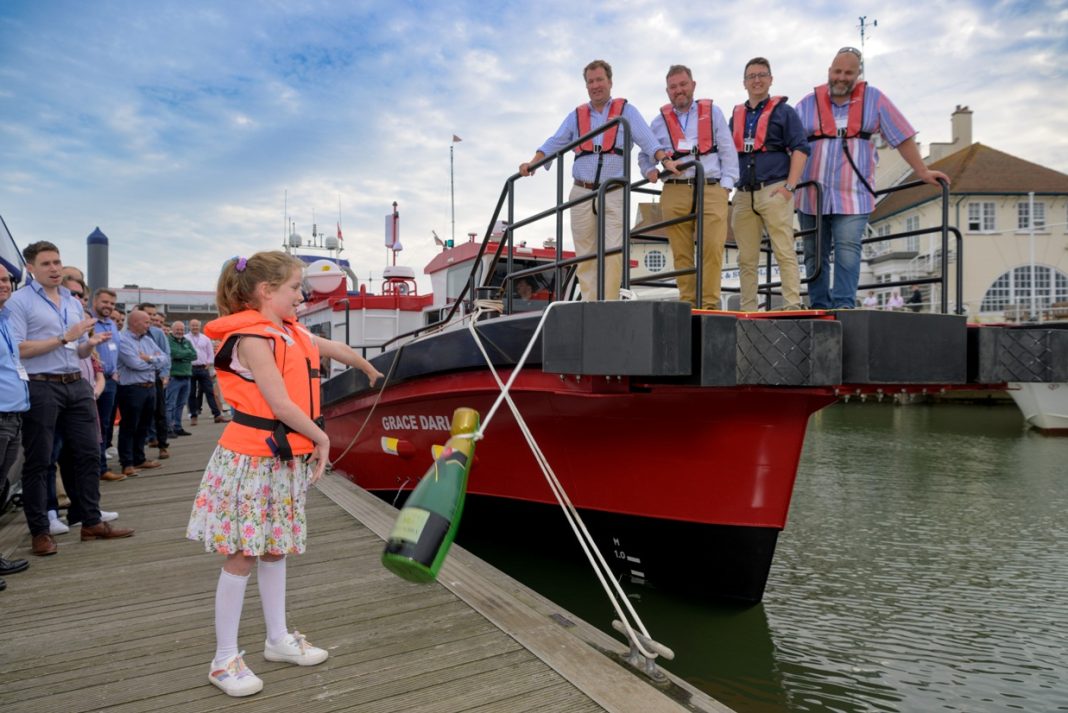 North Star’s new UK built hybrid powered daughter craft, the first of its type specifically designed for the offshore wind market, has been launched at a naming ceremony held at the Royal Norfolk and Suffolk Yacht club in Lowestoft, adjacent to the firm’s regional operations hub.

The vessel was christened ‘Grace Darling’ in honour of a famous lighthouse keeper’s daughter from the North East of England who risked her life in 1838 to save the stranded survivors of a wrecked merchant ship travelling from Hull to Dundee. Her life changed dramatically after her feat of bravery made the front pages of the national press and was reportedly read by Queen Victoria. A RNLI museum to mark her life was established in Bamburgh, Northumberland, in 1938.

The VIP event was attended by a number of the UK’s leading offshore wind developers, after the daughter craft was delivered ahead of schedule to further performance and field operations readiness, prior to the firm receiving the planned early delivery of its service operations vessel (SOV) mothership to the Port of Tyneearly next year. This will include a performance analysis and enhancements programme on the daughter craft, as well as crew familiarisation.

The Grace Darling is the first of four hybrid craft being built by Alicat Workboats for the leading offshore infrastructure support vessel operator. The full fleet, developed by sustainable naval architect specialist Chartwell Marine, will all carry the names of iconic women from The North East of England’s past to reflect the firm’s first offshore wind projects being supported out of the region, as well as its ongoing commitment to hiring locally and investing in the area’s supply chain companies.

Daughter craft support the safe transfer of in field wind farm technicians between the SOV, where they live while working offshore, to the wind turbines to undertake routine or remedial maintenance. They are also used for trips to and from shore with deliveries.

Matthew Gordon, North Star CEO said: “We are very pleased to have officially launched the Grace Darling and bring the world’s first offshore wind hybrid propulsion daughter craft to market. There is a long history of iconic women hailing from the region, and we wanted to enhance their legacy by naming our new green fleet in their memory as well as commemorate our local roots.

“Our unique model has been purpose designed and built under North Star’s guidance to deliver high performance and quality client service logistics after our extensive market research revealed that no existing model came close to what we want to achieve. The Grace Darling is the first of our next generation and new breed of sustainable, reliable, comfortable fleet that will deliver substantial value and efficiencies to our wind farm clients.

“We fully support the UK’s ship building industry and we are very fortunate to have a wealth of talent on our doorstep in The North East. We are 100% committed to investing in the local supply chain where possible to help drive forward our continued growth in the UK and European offshore wind markets.”

North Star has the largest daughter craft fleet in Europe, which is set to rise from 63 to 67 assets in the next 12 months as all four hybrid powered craft for offshore wind are delivered. With strategic locations in Lowestoft, Newcastle and Aberdeen, the business employs 1,300 personnel, including 100 deck and engineering cadets enrolled in its three-year training programme, now in its 26th year.

Safe installation of XXXL monopiles up to 5000 mt