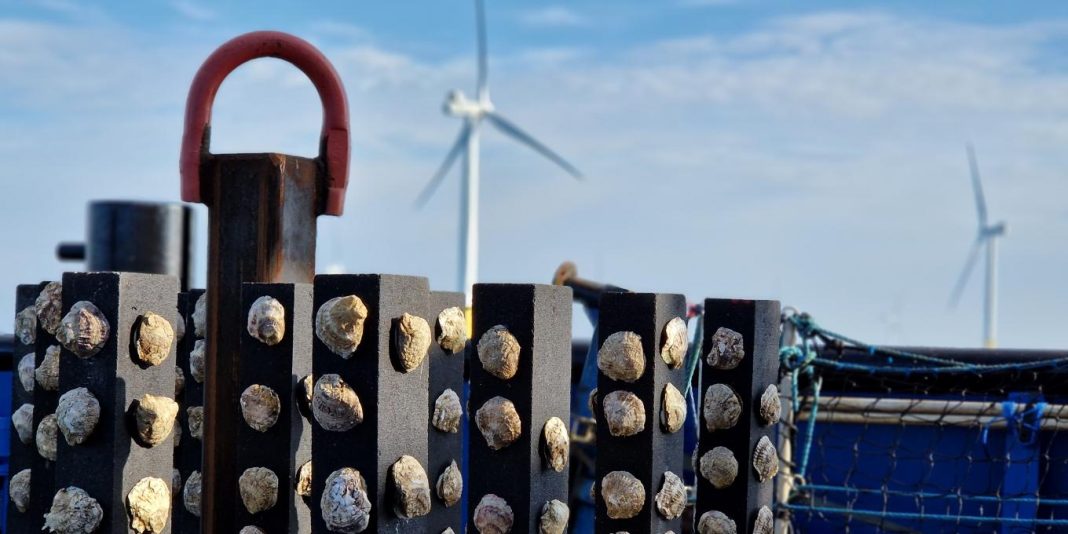 Four oyster tables – structures made of concrete and other material on which live oysters are placed – have been installed at Luchterduinen wind farm. By placing the oyster tables there, the Rich North Sea programme, energy company Eneco and marine contractor Van Oord are working to restore oyster reefs in the Dutch North Sea. The oyster tables feature an innovative design, the result of four years of research. This is the first time the design has ever been used in practice, giving the wind farm a global premiere.

Until about 200 years ago, 20% of the Dutch North Sea had large-scale oyster reefs. Now there are hardly any natural oyster beds left in the North Sea – a worrying development, because they are important for underwater ecosystems. According to Erwin Coolen, The Rich North Sea’s programme director, ‘A healthy North Sea is the key to achieving the climate goals. Nature development should be an integral part of every wind farm project. The years ahead will see the addition of thousands of wind turbines, so it’s very important that we build the knowledge needed to do this as well as possible.

The new oyster table design is tailored specifically to the prevailing conditions at Luchterduinen, with its strong currents and abundance of sand. The new tables weigh more than 3,000 kilos and are weighted at the bottom for extra stability. They are also installed on the scour protection around the turbine to prevent them from sinking into the sandy seabed. Instead of being placed in baskets, the live oysters are – for the first time ever – glued to vertical rods in the new design so that they have enough fresh water and oxygen to survive and reproduce.

‘What previous projects taught us about the way the oyster tables function has now been concentrated in this design for Luchterduinen. Doing this maximises the oysters’ chances of survival, and we expect to see real oyster reefs developing at this wind farm within a few years.’

The oysters placed on the oyster tables may release larvae next year that can settle on a hard surface, for example on the scour protection around the wind turbines. Lending the oysters around wind turbines in wind farms a helping hand gives oyster reefs a chance to develop. Future monitoring missions will therefore focus on the oysters’ growth, survival and reproduction.

Marin van Regteren, Eneco: ‘Eneco believes that we must live within the natural limits of the planet. That is our goal. It’s important to develop offshore wind farms that do not transgress those limits and that will have a beneficial impact on nature in the North Sea in the future. This project represents an important step in promoting the underwater ecosystem.’

The first pilot project to be carried out under The Rich North Sea programme commenced in 2018 at Luchterduinen wind farm, located 23 kilometres off the Dutch coast at Noordwijk aan Zee. The pilot involved installing oyster cages and reef cubes at the wind farm, which has been operational since 2015. Now, four years later, researchers are installing the new oyster tables, the design of which is based on lessons learned from the previous projects at the wind farm.